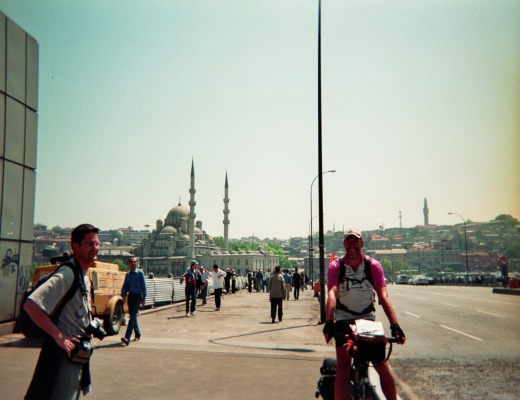 2001 I wanted to find out if it ´s possible to cycle home from my aunt ´s in Gibraltar within four weeks.Apart from being on the road far too early even for Spain in March/April I had not quite realized the meaning of Spain having the second highest average of heightmeters in Europe past Swiss.

An endless rainbattle at average 1.000hm with temperatures between 0 – 6 degrees C.

From Sevilla, I took the antique “Via de la plata” heading Santiago. Because of the heavy rain I turned right north of Cordillera Central and passed the Pyrenees in Andorra. Following Canal du midi, Rhone & Saone I reached the river Mosel. In a two days winetasting I reached the City of Koblenz and hurried home following the Lahnriver. On the last day, to make tho horrible weathercircumstances complete, I was hit by a blizzard.

For that reason I choose the seeming advantegous season May/June the next year and decided, cycling,   to complete the bow from strait to strait by reaching the Bosporus.

Aside the Thuringian Forest I hit Danube near Regensburg and met the Balaton 10 days later. From there I travelled Romania, along the northern side of the Karpaths, which I crossed via the pass of Bran, the putative residence of Dracula.

Near Ruse, I crossed Danube again and then the Balkan mountains in Bulgaria. For me, these mountains are the real border between Europe and Orient. Once yuo pass, vegetation, smells and people are completely different.

At Edirne, I entered Turkey and three days later I crossed the Bosporus in Istanbul using a boat.

In fact, I had made a bow from Africa to Asia.

To chill down, I had to cycle another 550km to Saloniki, Greece to take abath in the sea.

My friends shook their heads.