And no, I didn´t cycle the complete distance.

In a time every cretin can put his crap into the net and research everything, there´s no need to claim that.

Now you may say: show-off!

Then you can stop reading.

In case you´re courios what happend to me, you are kindly invited to listen to my story:

21:30 I go off as No. 357. of 472 registered competitors in the last group.Temperature´s still 28°C and nervously we rush straight towards the monstrous thunderstorm in the west of Milano, hoping, the turn direction Adratic Sea will be early enough not to hit it.

I try to hold to Vonni & Andreas´s backwheel, they´re to fast for me at all, and find into roadbook (a tear-off memo pad, cool idea), GPS Track and roadmarks.

Southwards Milano, we pass the road prostitutes, the „better“ standing upright in the dirt, lighing face and decollete´with their cellphone, the poorer cowering besides smoking tons full pieces of tyre, which don´t light up their  black faces at all…

I´m stressed, I hate nightrides and know very well about the difficulties of the hot, humid climate of the Po flatlands, I trie to settle down to skilled navigation

By the help of a group of Italians, I work it out:

In his little speech,Fermo Rigamonti asked us  explicitly to stick to the roadbook and the arrows sprayed on the road. „Who follows the track, will go longer ways“

I can´t remember that control…

Got it. Instead of measuring tangents to the lines of the track, apparently just drawn from one waypoint to another, crossing fields blindly, I work with my roadbook and look for the „frecce“. This way, you can find the quiet paths, the farmers use to open and close the embankments, watering their fields. Far off traffic, quiet and: shorter. Nevertheless, quarrelling, I don´t get into the flow.

The control is removed, I still have 80 minutes, though, I have to search the city for the guys. Went down from 267 to 386, the stickers for the carnet are numbered, good idea too, but not much motivating for me, though.

I get a brioche, water and hurry off, I´m in lack of time and suddenly there are Fabio, Pedro and a 3rd Brasilian. 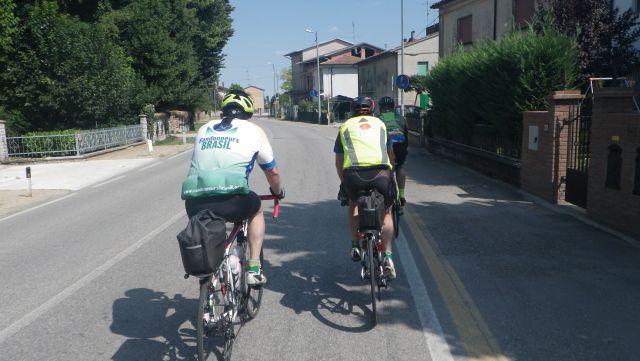 Asked, I tell them about my night, and they take me into the group, which makes it easier for me and they act properly in the heat, naturally. I´m in an increasing mood, therefor, on the way to the secret control, where we are maintained with focaccia and fresh melon, we overtake quite a few. 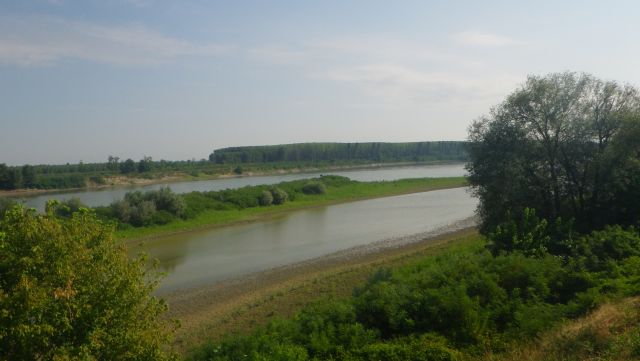 I´m the joker, whow, Finalese, it´s over, give me a beer, that´s a laugh for everybody, I feel, for me, it may go on like this, now. After a rest, we start again, I´m encouraged, for there are quite a lot of people around me, at least. After a while, this chilly feeling starts, and the knot in my stomach, I know, I should eat, but even the water goes down choking. I fumble with sausages and salted peanuts, as much water as I get down, in all the mess I lose contact to the group and let go. The guy with the hammer is grinning madly right in front of me. I keep pedalling quietly, concentrate on navigation,  solo I reach

The control is neither at the end of the last track, nor at the beginning of the following. Quite angry I rush through the city, until I remember Fermo´s words and look up the correct adress in the roadbook. This place is complety elsewhere, and I need help of a number of pedestrians to sort it out. At the entrance, my whole anger goes off to the lady, who is just watching me, silently. After three or four sentences, I stop, change to Italian and say:“ I´m sorry. Good evening.“ I get my sticker, she explains the facilities, food, drink, dorm etc.

One of the brazilian mates is out, and Vonni, solo, reports, that Andreas can´t go further, too. I see him, later that evening, yeah, he is out. Dehydration…

A couple of directives from the old army medic and here we go again, with the brazilian, but I order them not to wait for me. There they go….   While there´s a new huge thunderstorm in the west, I reach the first mountain, more or less a 1100meters high. Just kill that one till midnight, than take nap at the checkpoint. Short break in a busstop, thunder is very close, but no rain, then I get in touch with Vonni and two other germans, these fall behind in the first ascent. While I´m still thinking, if I should take care of Vonni, who lost her partner, she shifts gear and climbs off.

Solo, I climb passo sambuca, uphill a little blue spark in the dark forest and downhill two blue sparkling lights, the germans. I´m unutterably happy, the complete silence, the sihouettes in the bright moonlight, the view down on shining Comacchio at the seaside. At this point, mille et uno becomes my business.

On the leeside of the mountain, there´s heavy fog after the thunderstorm, this and the racing ambulance with turning flashlights in front of memake the descent quite exciting. In the last turns, my eyes fall shut three times, with pure force I reopen them and manage the road. uh,uh…

Down in the village, I search for „campo sportivo“, the checkpoint in

After I discovered this ruin- quite pissed off again – I recognize, that, in my desperate weariness, I did´t realize, that it´s another 14km to the control. On my way I meet an oncoming randonneur. Finished. Railway station. 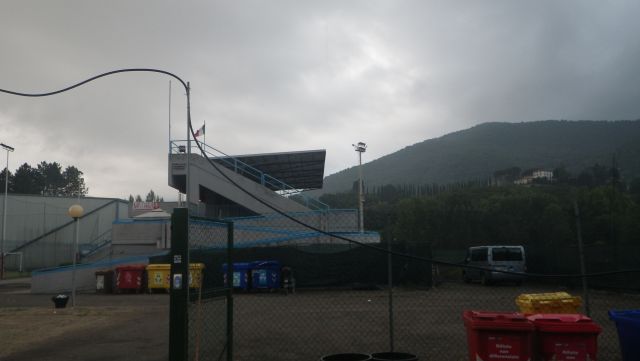 The other rando is white with wrath and fatigue:

„They can´t do that. Uphill ´there´s dozen´s of people in the woods, sleeping. They ought to have an emergency crew!“

„Listen, mate,“ I sigh, „If carrefour is closed, you go to kiosk, either.“

Who cares? It´s daylight now, no nap for me right now, the next 1000hm just waiting for me, I have to get back into time, it´s allowed to miss it twice… 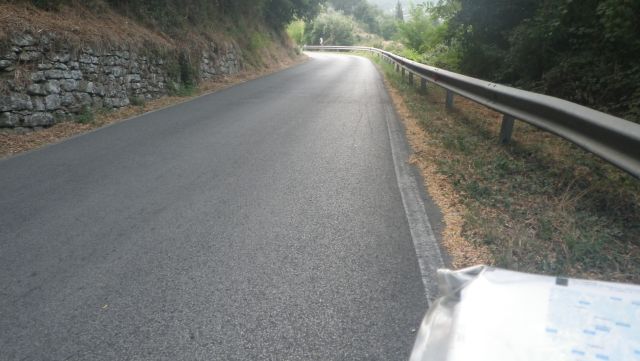 A desperate fight begins, the first step is extremely steep, and i´m sooo tired, but if I make it until 9:59, everything would be fine again.

People standing beside the road everywhere, staring…  why?

But it´s a 1000m descent to the next control, and then 80kms flat, perhaps I could get back into time, but then I have to take care to stay in the limit…

Waking up after hours, I realize: this will never work now.

I stumble into a hotel a couple of meters furthernd fall into a comatous sleep, after a shower in my smelly jersey and bib short.

Get up early, thinking it over again, this works quite well now:

the most honest solution: just go on. But then I would have to quit far more south, to get back to work in time, and reach Milano by train.

After another 130km cycling, I explain this to the control official in

That I kept cycling from Vallombrosa via Florence, and I plead to be allowed to finish the brevet under official protection but out of ranking

With a couple of questions, the guy verifies my story, smiling, he puts a sticker into my carnet and asks me, if pasta pommodoro are ok, or if i´d prefer risotto.

Followed by a huge mountain and an extremely cool descent into sunset.

later a 60km moderate ascent to the next control, on which „the long and winding road“ by the Beatles goes on and on in my heart.

not even this jam can trouble me now, I roll on and on and breathe the scenes and scents admiringly, until, at about midnight, I reach the quiet lake of

where I – tired and wrecked – but infinitly light in my heart, roll myself into my space foil. A movement awakes me again, as a lumpen man covers me carefully with a rug.

5:30I´m on the horse again, curious of the thyrrenian sea, I should reach in a couple of hours now.

the beauty of the landscape quickens me, as the days before, I marvel

There´s a couple of chunks to overcome, sweat is pouring and I swig like cattle, unfortunately I might smell lke, as well, having missed both bagdrops, means I´m still going in the first set of jersey…  at noon I reach

Here we´re asked to pay for food and drink, I don´t care, convinced, that only a spill can stop me before Milano, which actually doesn´t make me cautious, the following descents.

On the other hand, it´s the most surreal encounter of the whole tour:

Two german ladies, obviously rather 70 than 60, are talking about me, as I, dozed off at my table (rando´s have no habits), wake up. I´m offered the sun lounger in their garden, fortunately just one block away. I´m invited, to have a rest there, obviously very tired as I am.

The following part of the talks is about loneliness of cyclists en route and being alone at all, which is “ easier, the longer it takes“

I ask for „conto“, trying not to hurry to obviously and go back to the road.

Following, it goes up and down in the cliff lines, breathtaking views make me rest repeatedly, however, I don´t stop at the coastline, it´s high season, the noise and crowd of mass tourism are strenuous after the silence of the mountains. I´m very pleased, as the road detours into the valley direction

My plan ( a rando needs a good plan, so he can throw off dead weight, at a certain point) means, that I will sleep another 4h in Casella to make the last 2 steps „rested“. Indeed, on the way, there´s a short rain shower, in the following there are banks of fog in the valley, so, because it´s still early, I decide to take the next 53km as well, intending, not get the fog on my morning raid. Just makes me blind. Hastily, the inevitable „pasta pommodoro“ and here we go…. Crossing a narrow, industrialised valley, I finally leave the italian low mountain range direction Po – lowlands, it´s not that scenic here, but rolling fine, even on those crappy italian roads. On the last 10km, I figure, that it´s no wonder at all, that this human being became such an incredible cyclist, if he had to cycle these hills every day after school.

I reach shortly past midnight, place of birth and burial place of the legendary Fausto Coppi

This is the most inspiring experience at all, as I doze off in this pleasent, silent night, full of crickets. Witching hour – perhaps I got a hint? 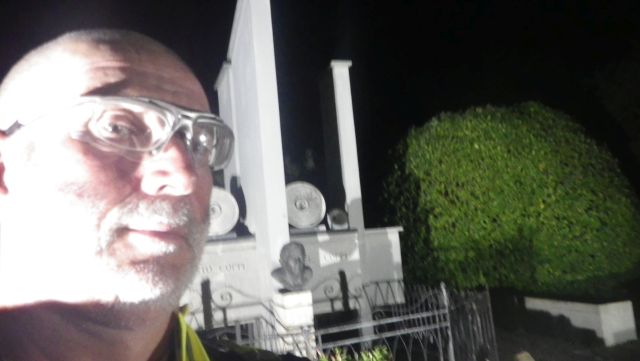 Refreshed, I arise again, and throw off the ballast (plan):

Obviously, the rain has been in the Po lowlands as well, it is humid and warm, if we get the condensation in the morning sun at 4-5:00am, I will cycle a sauna, blindly.

The decision turns out to be deadright:

On one hand, I´m completely euphoric, the legs are born a new, on the other hand my rating proves, as there´s thick fog around the river banks. I can pass easily, because there´s no blinding oncoming traffic 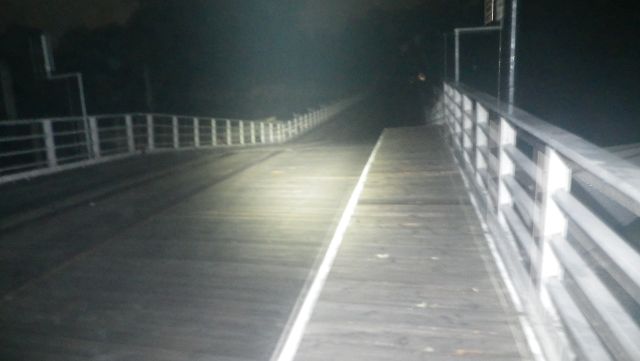 Once, at a branch of big Po, it becomes dangerous, shooting out of a left turn, I rather fall down on this pontonbridge, than I drive, over slippery grid and board, but I don´t fall.

With sharpened concentration, I rush to Nerviano

past the small paths, passing the temporarily orphaned workplaces of the alley cats

which give me a desperate new image of dirty sex….

Someone takes my carnet.

I´ve got blisters on the soles of my feet, never been cycling that hard ever.

I turn around, there´s Serena. She presents the evaluated carnet, my receipts in place of the missed controls, then a medal and a homologation.

I stand the kissing.

Then I turn, and start to cry.

For the brevet of my life