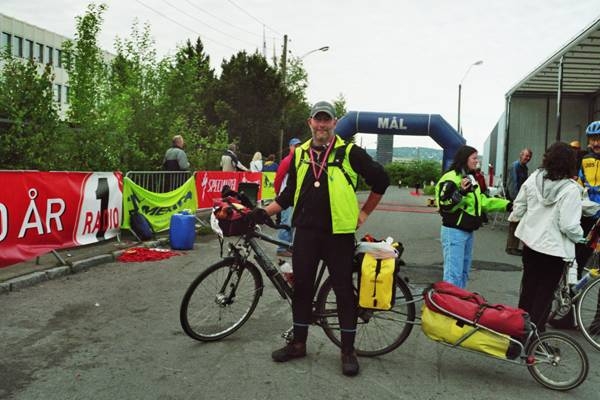 Up to now, this was the most painful tour. Just in time recovered from a fracture of the wrist I was suffering of since a crash in January  I was forced to take the train and Ferry to Oslo, Norway to reach  the event  in time. Cycling, I took the E 4 to Trondhem. I was participant of the 540km bikemarathon Trondhem – Oslo, also called “Styrkeproven” ( Test of strenght).

Originally I had planned, to travel there via Denmark, Sweden and Norway, to get a little training on the trip like I did last year at “Vätternrundan”

As I found out, my concerns were causeless: my wrath about two snotty guys from the city of Münster, Germany, who started with complete front- and backloaders made me decide to take the whole stuff on the B.oB. with me, probably being the first one to do that in history.

The race was hardly started when the rain came and didn ´t stop for the first 200km up on top of the Fjell. The climb up to 1000heightmeters was no real problem on that distance, though uncomfortable , that the controlposts had not opened the caterings until about 9.00a.m.

Then a pittoresque road passing Lillehammer with a grueling, which makes you weak after a while. Up and down all the time, one ramp following the next. The second night, the descents became dangerous because of my fatigue.

Whatever, I finished in 31.5 hours.My friends were astonished

Being aware that I had been ill for five month, not that bad.