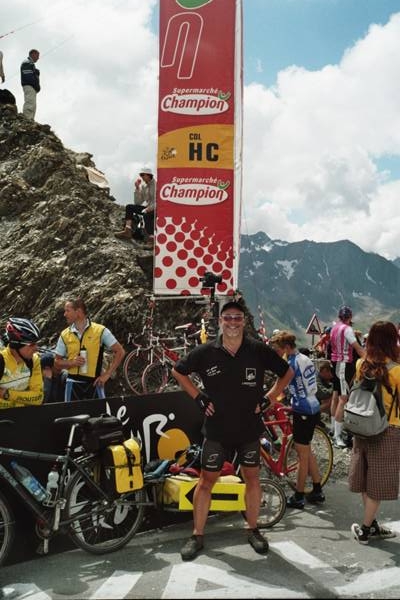 A hell of a tour – see Ullrich once and back home

Somehow Istill felt a deep disappointment of my first tour across the Alps, for the Passo Resia is not really a challenge. I wanted to make this good for myself   and took the expected last fight between the Tour de France Heroes Ullrich& Armstrong for occasion to go to the Alps again. Following the Rhine towards south, crossing the Swiss Jura (hurts too)along the Lake Geneve I reached the great St.Bernards pass, Aosta valley, Little St.Bernards pass and last, but not least, the valley of Vanoise, where the hardest stages of TDF were to take place. The Tour happens in the mountains. According to the weather, I had to cancel a climb to the top of Col d ´Iseran. Later I tested the stages “Courchevel”, ” Col de la Madeleine” and ” Col du Telegraphe” , with B.o.B.trailer of course, to wait for the Peloton on the top of the tour: Col du Galibier.

A ferocious solo attempt of Vinokourov and a sad end for Jens Voigt. But all for that a little odd: one hurries hundreds of kilometers in the mountains for two weeks and after five minutes it ´s all over. But you should once be a spectator of the Tour: I was so hot, I raced 95km towards home the same evening. Three days later, now following the Tuor de Suisse, I hit the Rhine again.

My friends began to show respect.