Franz of reiseraeder.de gave birth to the idea of taking a standard Touring bike of his instead of my own, because the financial and logistical effort would have been far too big.

The trip has begun:

Unfortunately it’s winter, which means rainingtime here. Big areas in centralAustralia are flooded at the momernt,

even the GHAN had te be stopped, so my Ayers Rock plans are in severe danger.

But I will go south anyway

the Aussies make big show of all the danders down here.

Mates, these buddies are dangerous: 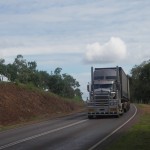 falling by my speedingbike, as I drive south. The extreme heat and humidity

are giving me big trouble

there will not be a cycletour to Alice Springs, not that way

Too many people have drowned in the desert.

first takes me to

far into the desert to ALICE SPRINGS

to make it complete, I caught the flu.

into the West and East McDonnell Ranges to

meet a guy who defenitely is crazier than me 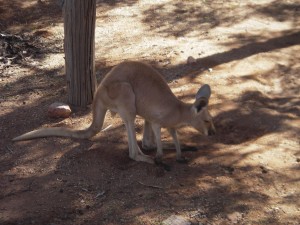 and because it ´s important to drink a lot, if you got a cold, the “Lindemann” is seen at the Bo`s in the evening

populate the centre of Alice.

The heat is dry down here, but so extreme that I get sunburn through the clothing!

So I decide to cycle at night:

About midnight I reach STUARTS WELLS, the roadhouse is closed, but I can get water in the restrooms. When funny people appear out of the night, I continue. With full moon, I can ride without lights, the silence is incredible, rarely you meet a car. At about three o ´clock the moon ceases and the starry sky shows all of it ´s magnificence.

In the morning I have breakfast in ERLDUNDA. I made 203km.

Only two nights later, after a bad thunderstorm in the desert, between

and YULARA, I reach

what the indigenous people or aboriginals call it.

are more interesting but I decline politely, afetr watching the sky.

-you buy the meat, cook it yourself and get as much ads as you manage

with stupid waiters – I wanted a glass of liquor, because I had completed 1000km, what a mess,

I had ordered a “shot”

(IF, you get it on ice, and you have to SIP it) I fled back into the

they heve their own beer, Kulgera Draught, but glasses of less than 0,2l.

is the road to COOBER PEDY, the “big hole of the white man”, that ´s what the name means in the abolanguage

I wouldn ´t even like to be dead here.

But big changes are in sight: South Australia.

One immediately recognizes the difference in the origin of the population: Free british and germans colonized this area, the restrooms are not for “mates” and “sheilas” but for “Ladies” and “Gents”. And if you let slip a “mašm” or “sir” in conversation, they like it.

My friend, the retired cadastral surveyor had explained that Australia is more or less flat.

So I imagined hills of 500m height, because I ´m so bored.

I left out HAHNDORF, the historic german city, there was Schützenfest.

And if I had planned it, they would have cycled here, too. Pity, they can ´t enjoy the landscape.

is on now. After I left the Adelaide Hills, I move along the COORONG, a beautiful lagoon, formed out of the mouth of Murray River into the Great Southern Ocean.

The night before I rested in this village, where I learned, that Kakadoos are a plague, more hateful than doves.

Tired, I look at the sign for the coorong resort, still 4km but it ´s another 45 to SALT CREEK. I ´m exhausted, but don ´t trust the signpost after my latest experiences. Cellphone, dial, oh! Connection!   The voice tells me”come down”. So Ihurry down the jolting road and find the best campsite of the tour. Run by aboriginal people, these don ´t smell but are very officious, they prepare dinner, Coorong Mullet, a lovely fish. While I ´m waiting for my food, the Chief tells me about the plans of his people. First, he was irritated, because I asked for the origin of the noise. After 4 weeks in the desert it didn ´t come up to me that the “noise” is the surf of the Southern Ocean, breaking at the shore 1km away. Suddenly everybody was gone, Iwas alone. With the surf, the unbelievable starry sky and billions of moskitoes.

The next day, I was so weak, that I accepted his offer to stay. Would have been a 100km to the next town and he clucked with beer, bed and freshly caught shark. Good decision:

A dream, you can hang out there for days, taste wind, waves, salt and watch nature.

just to show, what a lousy wind there was. And it wasn ´t even the Great Ocean Road.

That ´s Chinaman ´s Wells. Die archeologic facts are, that about 200 years ago, people built a well here.

It existed and gave sweet water. The white stuff is SALT.

The Aborigenes knew where and how.

So far for backwardly and declared to be humans “by law” (very popular saying down here)in the 70ies.

Declared to be human. 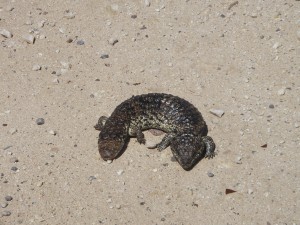 This lad wasn ´t that lazy. He opened his mouth very grudgy when I took the picture. 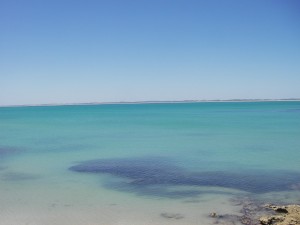 In there is everything tasty: Shark, Whale, fish and Calamari. Today very popular because of the italian and greek immigrants.The idea of eating cut squid did never occur to them in Oz, they used it as bait. Says Janice. 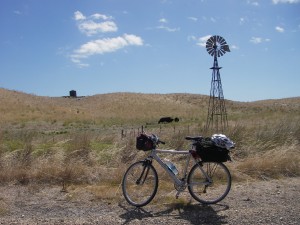 For a fistful of dollars

No idea why I didn ´t take a better picture of this tasty sandwich topping(Black Angus).

My appetite was whetted wherever I looked. 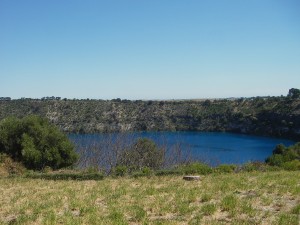 In “Lonely Planet”, they say nobody knows why the water is blue. Ahm, reflection of the sky, like we learnt at school? 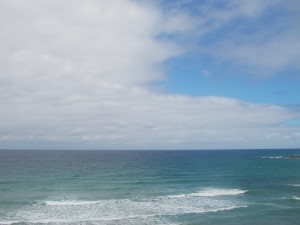 proof: grey on the left, blue on the right

From the volcanoes of Mount Gambier I wanted to go down to the coast, to the Great Ocean Road. 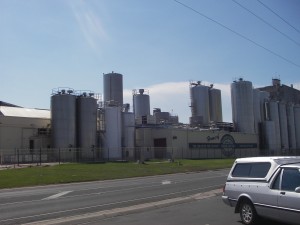 why cheese is no good here

I could learn in this huge dairy. The have ten sorts of cheddar.

Could be a vinery as well.

Seems like the put all tehe good wine into export, but handwork is not liked here.

And they name the stuff like this, for example: 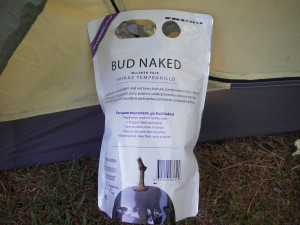 Honestly: this plasticbag thing is brilliant for cyclists. No weight and stable.

But I didn ´t like the wines very well, which might have reason that they don ´t work on one grape to make it perfect but pour everything together. So get might get a Sauvignon/Merlot/Shiraz in the licensed store.

They call it experimental. I call it blend.

Better I liked the local size of bottled beer: 0,75l

this very one I finished over the bar within 500m.

In this nest, two young mates tried to get a german drunk. I finished them, one after another.

But they told me something that should be fateful for my forthcoming.

past the Apostels the road disappears into the inland, respectively the rainforest

only Skippy is missing

this place I lost another half a day. So what? It ´s RAINforest.

Because of what the mates in NELSON told me, I have to speed up in GEELONG. The area is a big suburban part of MELBOURNE anyway, so it comply with me, that cyclists are allowed to drive the motorways in this progressive country. The noise is hard to stand after all the time out in desert and nature, but in the 3.5million city it will be much louder.

as I reach the pulsating city of MELBOURNE, of whose hectic hustle and bustle I am repelled.

got into trouble at the Old Melbourne Gaol

but not as much as those guys

and they really went mad!

where there was nothing like silence. Latest Feb.15th at 9pm it was over:

The guys in NELSON didn ´t only buy my beer, but the had given me an idea too:

not only sentimental, when I realized, that Bon Scott is dead for 30 years now, who died when I had my first parties, experiences with alcohol and women, I was as you can say “thunderstruck”…

But I crossed Australia with a pushbiketo hear them play at home. Can ´t be that bad at all.

I wanted to dig in for a last time, to show that a randonneur can go from A to B with ANY bicycle. 890km to SYDNEY within 3 days shouln ´t be a problem on the motorway. Loitered, took off at noon (got quite pissed at the concert) and had 200km at 10pm. New moon is not helpful on the motorway. Persistently, I ran into wrecked trucktires and broken glass, which made the brave Schwalbe tires give up at least. They had seen better days anyway, but the small pieces of wire from the waste on the road led to six punctures within two hours, a change of front and back tire didn ´t help much, either. At BENALLA I had a puncture right when I started and the next one 500m past. You don ´t find these wirethings until they bite.

My Garmin told me where the railway station is, I told the clerk a story why I needed a Ticket to SYDNEY right now and left the cycle to her hands to donate it to a needy person. She will take care.

So I relaxed in the train to Sydney, my last destination. Janice, a Lady I met in the train shortened the trip with an interesting talk. It ´s almost impossible, not to come into talk with Ozzies.

Somewhere behind, there ´s America

That ´s all that is left.

Oz is far away. But on the right in my calendar the next trip is marked.

And this journey gave me one proof:

I will die as a traveller.

With a bicycle and/ or a backpack