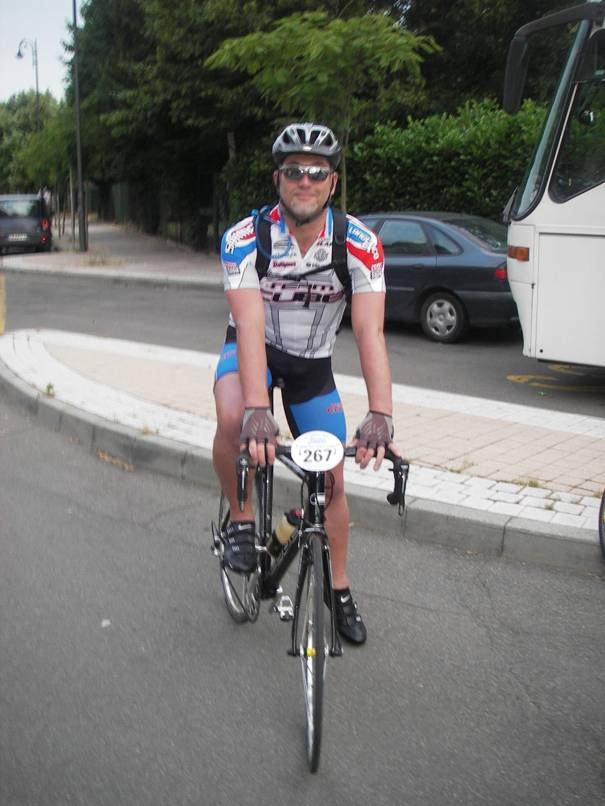 I think I am what you would call a lunatic: sold my car six years ago, attached a B.o.B.trailer to the bike and every vacation is a cycling trip, amongst other things Trondhem – Oslo with fully loaded trailer. But the Tour de France and other professional bikeraces are fascinating, too. After I have gotten a speedy racing machine, I booked the everybody version of Milano – San Remo, just to find out, what it feels like.

A strange group starts off in a bus from Karlsruhe. ” Ötztal -marathon, yeah, I did it ten times, me too, shoot out your lights, you don ´t even have a real bike, haha” and so on. A bunch of salivating alpha males, counting down their heroic deeds. Brägel (  character of a german cyclists apostil) is alive. I better shut the trap… In the hotel lounge down in Milano this goes on the same way, but one also can see some quiet guys who are at least as good as the rest, if not a little better.

The next morning, partly menacingly dressed men gather in front of the hotel and mix magic potions out of big boxes filled with powders, some even gulp a little pill. I might look strange to them as well, carrying a camelbak filled with clear water and a german flag. At least at home the FIFA world championship is in full activity and even though my belief in the announced “everybodies sports event” starts to fade, I will take it for that.

Latest in the take off area I realise, that this is another kind of event: hands off the brakes riders pop into the smallest breaches and bicker to be a second earlier past the registration loop. The atmoshere is tensed, finally we start it off !
While evrybody is kicking it off   on top, (partly in the true sense of the meaning), I keep back politely to get on the road in whole, just to find out, that the support vehicles are even more ruthless. Is a diploma worth the risk of   a stay in hospital? No!!! Five kms later there is nothing to see of the field but torn off bottles(some with the holder),nutrition bars, and the losers of the first battle, who have to deal with the first defects. So I drive on my own, no problem, my target is to finish.

At this point I ´m so angry, that I ride against passo turchino at full speed, the first catering   in Masone is raided, they have only coke left, the announced extra station of our group I overtake in a turn while climbing down to Genova. It is a good motivation, that meanwhile I began to overtake other riders, but without waterdonations of other team vehicles I wouldn ´t get much further.

Passing km 160, another trial is put on me: on the coast road to San Remo I have to resist the impulse to throw the bike into the sea, released by the view of barely dressed ladies on the beach and the delicious smell of grilled fish, while in my mouth there is the sticky taste of coke and bars. I otherwise have no more fear to lose way, because everywhere is garbage of the field, like wraps, jellypackings, bottles and so on. Friends, what ´s this all about? I myself see cycling as being a unit with nature, our sport can only lose reputation this way. I better not mention the behaviour in the traffic down the coast and the shoutings with cardrivers.

Anyway, the legs are good and the slight billowy road feels fine. Then our service vehicle can close the gap, at last, I fall to the left and get a hold in the open window, oops, not that easy it looks like in TV!”You allright?”   ” Yeah, and you?”   “Need something?” “In fact, a sip of water would be cool”   ”  Well, sorry, we thought you must be further  than we…”                           At the appointed place  Thomas and Karsten(dnf)  supplie water and fruit and tell me: “The way you are going and the gears you drive we are bewildered that you are not in the main group”   Yess!

Later I meet them again at the official supplies in Spotorno and Capo Cervo, while I ´m labouring half suffocated by exhaust fumes from traffic light to traffic light. At least, heaven is covered, so I don ´t have the sun on the head all the time.

I ´m in good spirits, as I pass the last supplie and discover that more and more drivers are falling back on me. Now   we reach these infamous last climbs, I conquer Capo Berta easily, there is  a sign “San Remo 40km” and Thomas told me that he now knows, I will make it, no doubt. On “Cipressa” I overtake many drivers in the glowing heat, easy going, I almost feel a little bit chilly, I think I ´ll make it until timeout. A great feeling, when I crank past the much younger belgian, who is just swearing without any resistance. On top of “Cipressa” there is a little church, a traffic light stops me for a moment, before I can go into the village.

In exactly this moment it ´s over: the head is glowing, I ´m cold and sweat pours out of my porosities in liters. No idea, how long I sit there, being explained by sympathizing Italians: I just had to pass the market, then it would go down again. Cycling? At the moment my whole concentration is needed not to puke on their feet!

Following a further demonstration of real, big sporting spirit by a dutchman (“You german pig, that ´s it for you, your ´e out nazipig!”) the head wins: 440 € and then come in on the sweeper bus? Ok, I will miss timeout, but to go through   should be possible. It ´s a little shaky down the hill, but the cool breeze is helpful, I even get some of the guys who passed by me on top. On the last uphill part I ´m back, feeling the end I rush past the finishing line, grinning. That the party is over doesn ´t matter, reason doesn ´t matter at all: down the bloody helmet and let the wind cool my head downhill. In the partyzone the others are waiting, and my big mouth is back again: “What, Klaus is still missing? I hoped I ´m the last one, they get famous also” Altogether I ´m the 572nd of 601 riders.

Therefore the representatives advertise a reward for the penultimate of our group: a choice of olives and pesto of a local farmer. Great.
The next morning, exhaustion is followed by the usual racingbike macho talk, one dreams of the next races.

As I store my CUBE in the bustrailer this wonderful morning to drive home 16 hours, I know: this is nothing for me. With the racing bike the aspect of travelling has to be felt as well. This is, what I tell the rep. in the bus.

But everyone has his own philosophy for cycling and you machos like it like that, ok for me. I ´ve been driving in a league that was definitely not mine, but it was cool.

You might remember, if you see a fully loaded tourbiker next time:

we ´re doing another way, but we ´re hard , too, and a friendly ” hello”   should be possible, right?